More than ever Scotland can boast a host of talented young players causing one critic to suggest a jazz hotbed approaching New York proportions. Many of the musicians are grouped around the Conservatoire in Glasgow, and play on a regular basis around the many bars and clubs in the city.

Here’s a new list ofintriguing new faces that are emerging on the scene, bringing fresh visions and expanding the boundaries of the music in the process.

Here are ten to watch out for in Edinburgh Jazz & Blues Festival 2019: 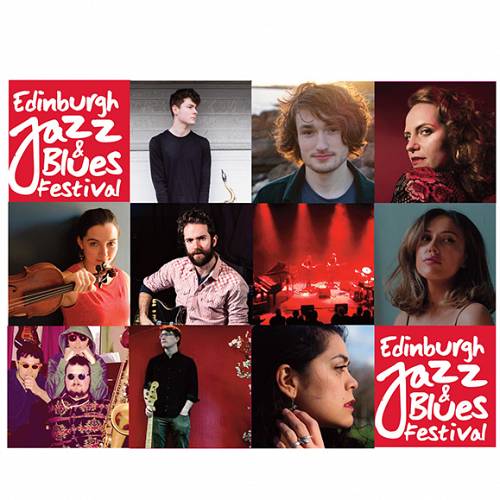 This young pianist is making waves all over Europe from being a finalist on BBC Young Musician of the year to touring across Norway, Sweden, Estonia, Lithuania, and taking part in Ronnie Scott’s International Piano Trio festival this August. After their date with Edinburgh Jazz & Blues Festival they will be playing at Stockholm Jazz Festival. Fergus cut his teeth in the Fife Youth Jazz Orchestra and then refined his piano playing and composition skills at the Royal Conservatoire of Scotland followed by a period of playing professionally, as he comments “concerts of other people’s original music have been the biggest learning curve for me - for some reason, most Scottish musicians write really hard music!” Fergus’s unique music weaves folk influences into jazz, as the Herald says “communicating warmth of personality and the ability both to convey a sense of place and landscape and make a melancholy phrase somehow spiritually uplifting”. His trio comprises David Bowden (bass) and Stephen Henderson (drums) and excitingly they are talking about recording a second album. 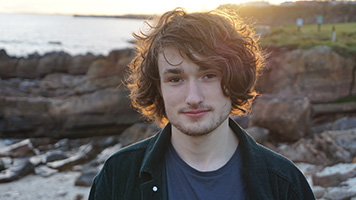 Still attending the Royal Conservatoire of Scotland and learning his trade under stellar Scottish saxophonist Tommy Smith, saxophonist Matt Carmichael is making waves on the jazz scene. Jazzwise named him “One to Watch” and Tommy Smith describes him as “world class”. Matt started playing the saxophone aged 11 and grew up playing in bands such as the East Dumbartonshire Schools Jazz Orchestra, NYJOS, TSYJO, explaining “jazz was introduced to me by my teacher at the time, baritone saxophonist Allon Beauvoison”. Increasingly promoters are sitting up and taking note as, this year, he is playing Celtic Connections, Glasgow Jazz Festival, Latitude Festival and performing in London at Pizza Express. 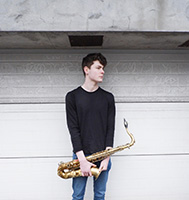 Combining elements of noise-rock, experimental hip-hop and jazz delivered with punk energy on stage, saxophonist Harry Weir’s band AKU! Follows the path set by Shabaka Hutchings, Fela Kuti and Young Fathers. He grew up listening to James Brown, Average White Band. First jazz album I heard was probably ‘Miles Ahead’ when I was around 3 or 4 (my dad is a big Miles fan). “I started paying jazz around age 14, taught by Paul Towndrow, joined various youth big bands and formed my first band “The Cosmonaut Arkestra”. After studying in Birmingham, Harry returned to Scotland joined Graham Costello’s STRATA and formed AKU!. AKU! Are playing a host of Festivals in 2019 including Durham Jazz Festival and Kelburn Garden Party. 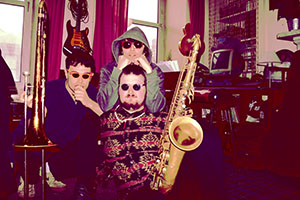 One of the sparkling young voices on the jazz scene today, singer Georgia Cécile, is inspired by a range of musical influences including Sarah Vaughan, Nina Simone and Stevie Wonder. A powerful onstage presence and adept lyrical interpreter with tremendous tonal command, Cécile’s mature delivery belies her young age. From studying music at Napier University she says “I immersed myself in jazz music, spending many hours observing the masters.  I learnt the ropes playing with musicians on the scene, it took many years to develop my craft.  The ultimate goal for me is connection - if I can send people some place through a song, then I’ve succeeded in my art.” Now she is joined by a stellar sextet featuring writing partner Euan Stevenson on piano, Mario Caribe on bass, Max Popp on drums, Konrad Wiszniewski on saxophone and Colin Steele on trumpet as she features material from her forthcoming debut album alongside well loved standards. 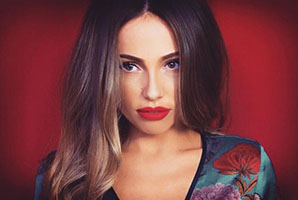 Led by bass player, David Bowden who says “Mezcla (which means mixture) comes from a desire to mix all my musical influences into one project, so there's jazz, funk, rock, folk, world music and everything in between. I spent some time studying in Ghana in 2017 and that West-African influence has ended up being a big part of the Mezcla sound too”. David studied at the Royal Conservatoire and is also a member of Fergus McCreadie Trio. Mezcla 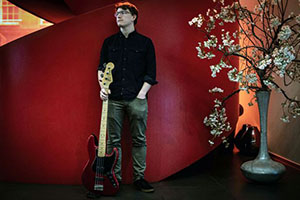 Violinist, Kellermann is a graduate of the Royal Conservatoire of Scotland and blends Scottish folk music, contemporary classical music, jazz and minimalism into contemporary soundscapes which The Fountain described as “truly transcendent”.Kellermann is a founder of the contemporary folk trio Farrland and a member of the award-winning jazz/funk/folk collective Fat-Suit. To realise her musical vision for COLOURWORKS she has enlisted the services of some of the finest young musicians in the Glasgow jazz scene, includingFergus McCreadie (piano), Mark Hendry (double bass) and Graham Costello (drums). 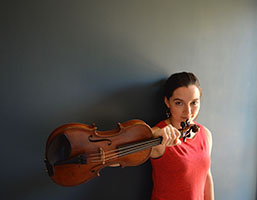 “Blues is my musical ‘first-language’ and it infuses everything I play. Even when I’m

playing with The Katet or Thunkfish the blues is always there. I don’t think I could hide it

even if I wanted to.” Jed started playing the guitar aged 9 and performed his first gig at 16, In 2015 Edinburgh Jazz & Blues Festival sent Jed to the US to seek out blues musicians. Jed met and worked with stellar harmonica player Brandon Santini creating a musical partnership that continues today – with Jed travelling to America last year to guest on Brandon’s latest album. The Hillman Hunters repertoire ranges from 1950s and early 60s blues classics and original material. 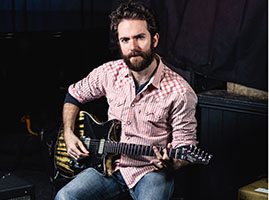 Music is in singer Cat Loud’s blood. She comes from Mull, sang in the primary school’s gaelic choir and her grandfather was accordionist Bobby MacLeod. She is a born performer too, “I love theatricality, satire, mingling with an audience and finding that fine balance between comedy and pathos”. Since graduating from University of Glasgow, she has worked with Finn Anderson on the Fringe and performed with Blueswater. She’s always loved jazz and now steps centre stage fronting two bands at EJBF and paying homage to the great singers that have gone before including Billie Holiday, Chet Baker and Melody Gardot. She has won accolades aplenty with Graham Norton describing her as a "perfect night cap… stunning!”, whilst The List says “a brand of dusky torch singing which stuns the room into silence.” 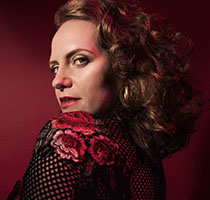 Powerhouse drummer, Graham Costello, fronts one of the most exciting bands on the Scottish scene. Clash Magazine describes their music as "startling, groundbreaking...it explodes definitions to seize fresh space" and it’s also hugely popular as CD and ticket sales from their debut album OBELISK confirm. He started drumming aged just 6 and he explains “I think I've taken quite a different path to the jazz scene compared to others. I came up playing in the Glasgow independent/underground scene with my noise rock guitar-drums duo Young Philadelphia, then later on with electro-psych band Outblinker. I believe the way I play my instrument and the way I write music is very much in keeping with these jazz and experimental backgrounds coming together”. As well as playing with his standard quintet, for EJBF, Graham is also adding a hand-picked string quartet in the STRATA Expanded Project. Strata includes Fergus McCreadie, Joe Williamson, Liam Shortall, Harry Weir and Mark Hendry. 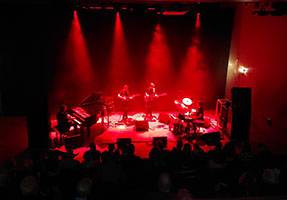 Smit’s star is in ascendant ”.. a real talent, oozing style and charisma and belting the fantastic numbers with real zing and passion” (Broadway Baby). She fronts several bands includingQueen’s of The Blues, Cow Cow Boogie but for Edinburgh Jazz & Blues Festival she has created a new show – the eponymously titled “Nicole Smit”. “The show is going to be about how the blues inspired my career, how the female artists that inspired me found their space and how they inspired me to find my space in the industry. There will be elements from older Queens of Blues shows and then new songs that I have chosen myself this year and new arrangements of a couple originals”. This show represents a coming of age for Smit, who recollects” I was incredibly shy and self-consciousness as a child and a young person due to my brachial plexus injury which I’ve had since birth. I was reluctant to have anyone pay attention to me because I was painfully aware that I wasn’t “perfect”. This was my biggest fear as I took the stage for the first time but I faced my fears and slowly accepted myself as I am and not as I thought I should be.” The music will be powerful just like the singer. 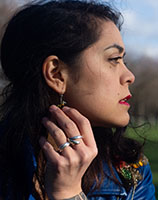